In the world of video recording monitors, there are surprisingly few options that sit securely at the top of most filmmakers and industry professionals’ lists.

One of those is the Atomos Ninja V+ which has been quite popular since its release. However, while the Ninja V+ might be the more powerful older brother, many of us do just fine with the Ninja V.

Whether you’re shooting HDR or regular SDR, the Ninja V has been one of the best options for professionals and prosumers alike with its support for up to 30 different cameras with its ProRes RAW (which itself is just one of the existing codecs offered with the Ninja V).

So, for anyone currently debating which direction they should go, here’s a solid argument and going with the Ninja V as one of your best bets.

The Ninja V was pretty groundbreaking when first released in terms of its ProRes RAW integration, which we now see some regularly with the Ninja V+. However, while the “big brother” product is indeed awesome, the Ninja V itself remains one of the brightest stars of the Atomos brand.

The Ninja V does a good job of taking just exactly what your camera sensor is capturing and enhancing it into something greater that you can view in pristine detail. The Ninja V really should give you complete confidence in whatever you’re recording as you can safely, securely—and cinematically (if you know your stuff) —get your best shots on set.

The Ninja V is also now able to record H.265 (with paid activation) and compatibility with other codecs like DNx and the aforementioned ProRes, as well as includes a wide range of other codecs to suit your unique workflows and delivery formats. 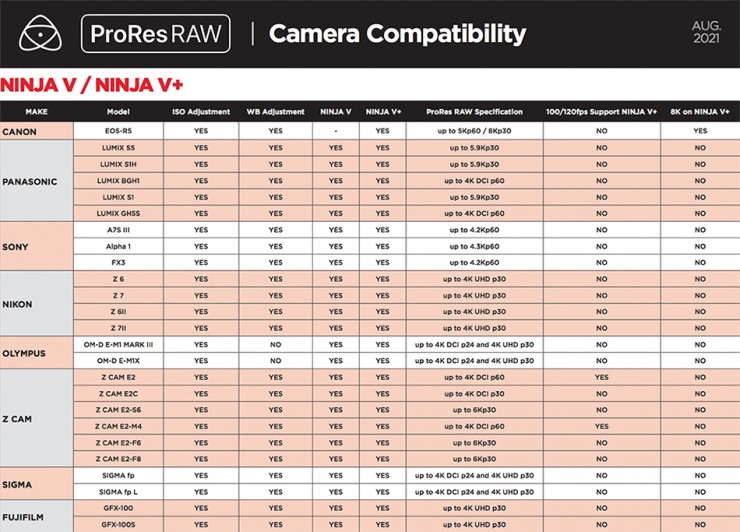 It’s also worth mentioning that the Ninja V hosts a wide variety of AtomOS monitoring features that can help to turn this 5” monitor into a “one-stop-shop” of sorts for capturing and reviewing footage.

You can also expand the capabilities of your Ninja V with the AtomX SYNC and SDI modules and the new AtomX CAST dock which transforms your Ninja V into a 4-input HDMI switcher—a huge plus on set.

Here’s a full list of some of the best specs and features for the Ninja V:

In summary, while the Ninja V+ might still be the bigger brother offering in Atomos’ line, you should absolutely consider the Ninja V as well as one of the best recording monitors out there.

You can purchase the Atomos Ninja V online or at any authorized dealer across the world.